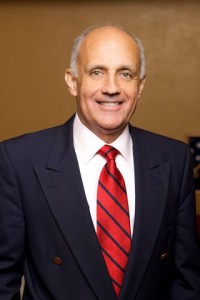 Born to a poor Hispanic family in New York City, Dr. Carmona experienced homelessness, hunger, and health disparities during his youth. The experiences greatly sensitized him to the relationships among culture, health, education and economic status and shaped his future.
After dropping out of high school, Dr. Carmona enlisted in the U.S. Army in 1967. While serving, he earned his General Equivalency Diploma and went on to become a combat-decorated Special Forces Vietnam veteran. After leaving active duty, he attended Bronx Community College of the City University of New York through an open enrollment program for veterans. He received an associate of arts degree. He then attended the University of California, San Francisco, where he received a bachelor of science degree (1977) and medical degree (1979). At the University of California Medical School, Dr. Carmona was awarded the prestigious gold-headed cane as the top graduate.
Trained in general and vascular surgery, Dr. Carmona also completed a National Institutes of Health-sponsored fellowship in trauma, burns, and critical care. Dr. Carmona was then recruited jointly by the Tucson (Arizona) Medical Center and the University of Arizona to start and direct Arizona’s first regional trauma care system. He went on to become the chairman of the State of Arizona Southern Regional Emergency Medical System, a professor of surgery, public health and family and community medicine at the University of Arizona, and the Pima County Sheriff’s Department surgeon and deputy sheriff. He is also a Fellow of the American College of Surgeons.
Public health came as a second career after Dr. Carmona went back to graduate school while working in order to complete a master’s degree in public health at the University of Arizona. His interest in public health stemmed from the realization that most of his patients’ illnesses and injuries were completely preventable.
Dr. Carmona has also served for over 28 years with the Pima County Sheriff’s Department in Tucson, including as deputy sheriff, detective, SWAT team leader and department surgeon. He is one of the most highly decorated police officers in Arizona, and his numerous awards include the National Top Cop Award, the National SWAT Officer of the Year, and the National Tactical EMS Award. Dr. Carmona is a nationally recognized SWAT expert and has published extensively on SWAT training and tactics, forensics, and tactical emergency medical support. Dr. Carmona has also served as a medical director of police and fire departments and is a fully qualified peace officer with expertise in special operations and emergency preparedness, including weapons of mass destruction.
In 2002 Dr. Carmona was nominated by the president and unanimously confirmed by the United States Senate to become the 17th Surgeon General of the United States. Dr. Carmona was selected because of his extensive experience in public health, clinical sciences, health care management, preparedness, and his commitment to prevention as an effective means to improve public health and reduce health care costs while improving the quality and quantity of life.
As Surgeon General, Dr. Carmona focused on prevention, preparedness, health disparities, health literacy, and global health to include health diplomacy. He also issued many landmark Surgeon General communications during his tenure, including the definitive Surgeon General’s Report about the dangers of second-hand smoke.
Dr. Carmona has published extensively and received numerous awards, decorations, and local and national recognitions for his achievements. A strong supporter of community service, he has served on community and public and private national boards and provided leadership to many diverse organizations.
In 2006, Dr. Carmona successfully completed the statutory four-year term of the U.S. Surgeon General and was named to the position of vice chairman for Canyon Ranch, a leader in the health and wellness field for over 30 years. He also serves as chief executive officer of the company’s Health division and oversees health strategy and policy for all Canyon Ranch businesses. He is president of the nonprofit Canyon Ranch Institute and the first Distinguished Professor of Public Health at the University of Arizona’s Mel and Enid Zuckerman College of Public Health.